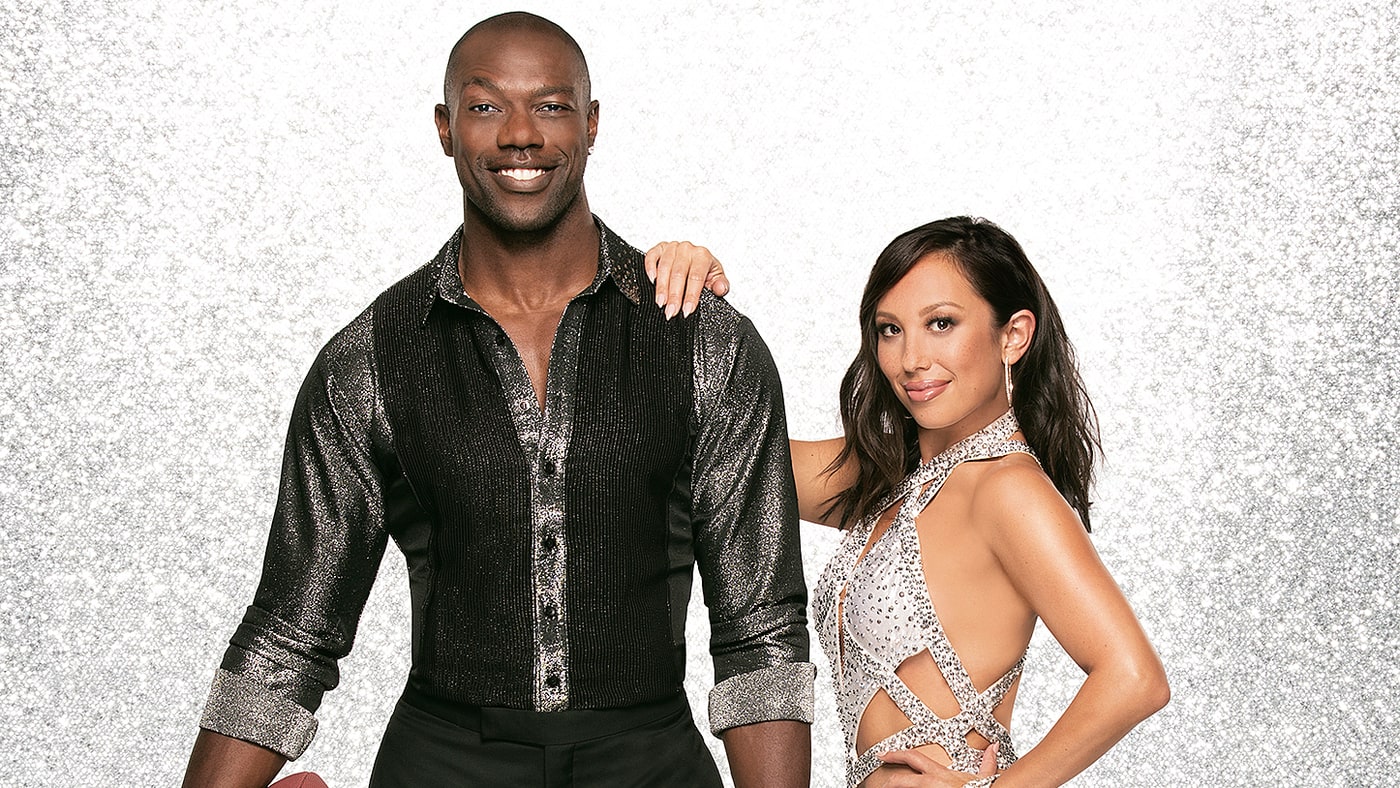 Dancing With the Stars pro Cheryl Burke is blogging exclusively with Us Weekly about her quest to take home the season 25 mirrorball trophy with partner Terrell Owens! Check back each week for her latest update on the competition.

Taking the stage last Monday was hard for all of us because of what happened in Vegas the night before, but at the end of day, like what Tom Bergeron said, the show must go on. I just hope that we were able to bring some joy to people’s homes by watching Dancing With the Stars.

I think it was very smart of production not to have elimination that night. We found out before the live show started that there was no elimination, but that didn’t change anything about our dance, except the scores were combined from both weeks.

We worked extra hard on our salsa last week. I’m so proud of Terrell and he got his highest score yet; all 7s! Our scores are slowly going up, and I really pushed him as hard as possible. I filled the salsa with so much content, and I put the pressure on him to step it up, and I think he did just that. I thought the routine was the most entertaining of the night, because it had break dancing, there was salsa, and it was a big block party, which is the vibe I was going for.

Terrell did mess up, and Carrie-Ann called him out for that, but considering he was able to move on, I was really proud of him for that. We had a huge lift at the end, so I wanted to make sure that mistake didn’t mess up the rest of the routine. I knew right away when he made that mistake. I swear I have eyes everywhere, so I see every little thing.

I was talking to him during the dance. I was like, “Come on! You still have 85 percent of the dance left.” I just wanted to get him back in a positive mindset, and he is really hard on himself. After that one little mess up, Terrell almost had tears because he had been working so hard. Carrie-Ann said she had to deduct a point for the mistake, but it felt good knowing that it was going to be an 8 instead of a 7 from her.

This week is Most Memorable Year and for Terrell it was 2012 when his grandma passed away. She played such an important role in his life. She basically was the mother and father figure, even though he does have his mom. She was his mentor and took care of him from when he was a kid. Just talking about it brings him to tears, so you are going to see a different side of Terrell that no one has seen before. You aren’t going to see T.O. this week; you are going to see the real Terrell.

We are dancing to “I have Nothing” by Whitney Houston. It’s a song that reminds him of his grandmother. It’s a Viennese waltz, so the set is going to be very angelic. He told me that his grandma would be so proud of him these last few weeks doing Dancing With the Stars. She would only let him watch Michael Jackson as a kid, or break dancing, so she would have loved to see Terrell dance like this.

We are going from the salsa to the Viennese waltz, which are two completely different styles of dance. Terrell has done the fox-trot, so he knows about frame. This is where he can really prove to the judges that he can dance his height when it comes to his arms and hitting his lines and standing up tall. This is his chance to really show the judges his technical side of his dancing. So far in rehearsals, he is doing a good job dancing to his height. It’s still a challenge, but he really does take what the judges say back to the rehearsal space. He is a hard worker and he just wants to get better each week.

This week is more about getting to know who Terrell Owens is. It’s not about his competitive side, even though he is trying to get higher marks. It’s more about tapping into his most memorable year, which is 2012, and I just hope when that package airs, he doesn’t look at it because it will bring him to tears before the dance starts.

It’s going to be an emotional night for everyone.

Dancing With the Stars airs Mondays on ABC at 8 p.m. ET.