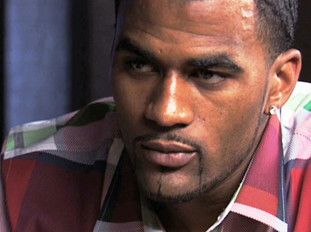 As soon as James Hardy knew reconstructive surgery was the course of action for his injured knee at the close of the 2008 season, the young wide receiver also understood that part of his 2009 season could also be compromised. In the end Hardy’s contributions on the field were indeed very limited last year, but the young receiver still succeeded in one important area of the game acquiring rare football knowledge from a very unlikely source.

The moment that Terrell Owens signed as a free agent with the Bills a year ago, Hardy committed himself to learning as much as he could from one of the league’s most productive wideouts of all time. Of course befriending a veteran like Owens, who had almost one-thousand more career receptions than he did, appeared to be a lofty challenge.

But Owens, who was not known for letting teammates in, took to Hardy quickly and gave him answers to anything and everything about what to expect and what it takes to be a consistent and productive NFL receiver.

“I got everything out of him in probably the first five months,” Hardy told Buffalobills.com. “There was nothing more I could get from him that I needed. He let me pick him apart exactly like I wanted him to.”

From daily questions about the game, playing the position, adjusting to defenders, communicating with your quarterback through the course of a game, Hardy got the entire unabridged version from a receiver that most believe is destined for Hall of Fame honors when his career is over.

“I don’t think anyone has had the kind of access I had with him,” Hardy said. “But he’d tell me, ‘I don’t know what it is about you, but you’re different and I want to help you.’ We just had a lot of the same experiences that he felt he didn’t have with anyone else.”

Both Owens and Hardy had childhoods with an often absent father. Both were crazy about basketball, but wound playing football at colleges not known as football schools. And both felt coming out of college they did not get the respect they felt they deserved.

“There were a lot of similarities,” said Hardy. “I never stepped on his toes and never went at him in a disrespectful way.”

“I can see myself in James and what he is doing as far as picking my brain,” said Owens just before the 2009 season. “I’ve talked to him about how to handle certain things.I think I am well suited to answer those things because experience is sometimes your best teacher and I think he can learn from a guy like myself.”

Coming off his knee surgery, Hardy did not step on the field to run routes until the latter stages of training camp, but his personal tutor gave of his time to school him on the finer points of being a successful receiver.

“There were so many things that he helped me with that I probably can’t pick just one,” Hardy said. “Getting off the jam, how to come ready for practice, how to do it every single day, every single play, even when you know you’re not getting the ball or when things go wrong.”

Once training camp concluded and the team was back at One Bills Drive full time, the mentor-apprentice relationship continued. After a day at the office, Hardy would talk to Owens on the phone in the evenings. Living just three minutes from each other, Hardy was often at his teammate’s house soaking up every ounce of NFL expertise he could.

“At times he may have slipped,” said Hardy. “He’d point out all his flaws to me and that was the thing that he wouldn’t do with anyone else, but he’d say, ‘Really no one else would ask me the way you ask me.’ All the flaws, the mistakes he made with the media. He broke everything down to me.”

Now equipped with all of this knowledge Hardy is beyond anxious to put it to good use. With Owens no longer in the fold as well as veteran Josh Reed, Buffalo’s offensive staff is clearly turning the page at the receiver position with just four wideouts currently on the roster.

“We have one guy that’s kind of proven really,” said head coach Chan Gailey. “Lee (Evans) is a proven guy. The rest of the guys we’ve got to take a look at and see what they can do. They’ve got some talent and we feel real good about them, but we’ve got to get them in here and get them to work and see what we’ve got. It’s not a lack of quality. I think it’s unproven at this point.”

Hardy, who has spent the entire offseason in Buffalo, has already sat down with his new receivers coach Stan Hixon.

“He just said to be ready,” Hardy said. “Everybody has a clean slate. It’s like you’re a rookie again. More learning, but I’m just so excited. I’m just ready to go.”

And though Owens will no longer be just a few steps away in Buffalo’s locker room, Hardy is confident that he can still call on the mentor that he feels has prepared him to take advantage of his NFL opportunity like no other.

“It’s kind of like a big brother, little brother thing that developed,” said Hardy. “It’s a relationship that I cherish. I definitely took all his advice and hope to put it into my repertoire and my game.”
If he can, Buffalo’s passing game figures to be a lot more promising in 2010.