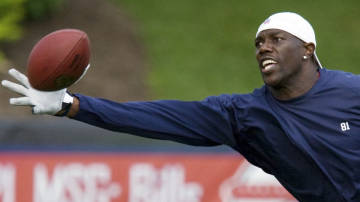 Carson Palmer loved the move last March when the Bengals signed wide receiver Antonio Bryant. But his quarterback eyes couldn’t resist what they almost had with Terrell Owens.

“What would be wrong,” Palmer had asked back then, “if we got both of them?”

Nothing because it turned out that the Bengals and Owens were able to come together on the money obstacle Tuesday when an NFL source said they had reached what is believed to be a one-year agreement.

“Our team is excited and pleased across the board,” Lewis said. “Terrell is a proven, productive player who can come in and help us. It’s a big move for us, one that we really think is going to help us.”

Owens is expected to be at the first day of training camp Thursday at Georgetown College after the club and agent Drew Rosenhaus started talking in earnest Monday. Indications were they wrapped up the deal at the end of buisness Tuesday with the Bengals’ first team meeting of the season less than 24 hours away. Reports have the deal worth as much as $4 million in incentives with a $2 million base.

(ProFootballTalk.com reported the most likely incentives Owens will get is $333,333 each for 60 catches, 900 yards, and 10 touchdowns.)

The move brings together the NFL’s two most outrageous and outgoing wide receivers after a decade Owens and Chad Ochocinco helped establish it as the diva position. Two weeks after the friends began starring in back-to-back reality shows on VH1, they are now the co-stars of Palmer’s effort to produce a Super Bowl passing game.

With the Bengals 12 days away from opening the preseason in the Hall of Fame Game in Canton, the Bengals have their first no-brainer Hall of Famer since, well, depending how you feel about Corey Dillon. And if the Ocho gets a Super Bowl ring, he would have to be in the discussion with his numbers.

Ochocinco tweeted, “My homeboy is a Bengal all our games have been moved to pay-per-view,” and reached soon after The Ocho admitted he was so happy with the news that he was joining his fellow six-time Pro Bowler that he couldn’t talk.

“You don’t realize how big this is for our team, the city, football,” The Ocho said. “Our offense is going to be unfair. How can you stop us? There are going to be some games (running back) Cedric Benson is going to be able to play without his cleats. I don’t think there has ever been a tandem like this.”

Reminded of his “Batman and Robin” offseason tweets in an effort to lure Owens to Cincinnati, The Ocho said, “This is Siskel and Ebert. Bonnie and Clyde. He’s Bonnie, I’m Clyde.“

The Bengals offensive coaches, led by coordinator Bob Bratkowski, are on board with the move. In fact, the recommendation of Owens to them from Palmer look to be the event that triggered the negotiations. And count defensive coordinator Mike Zimmer on the bandwagon, too.

They were on the Cowboys together in 2006, when Owens led the NFL with 13 touchdown catches, and Owens came up with a big play against these Bengals in Zimmer’s first year in 2008.

After the Bengals had crawled to within 17-16 of the Cowboys early in the fourth, Owens blew it up when he turned an every-day slant route into a 57-yard touchdown catch over the middle. It was one of just two catches for 67 yards on the day, but it won the game.

“He’s strong. We rolled up on him all day and got somebody in his face and the only time we didn’t the guy beat us,” Zimmer said. “You have to be careful of him.”

On paper, it hits the Bengals right where they have needed it since 2006, when they began coping with the absences of the other downfield threat next to The Ocho, the late Chris Henry. Before Henry was killed in a car accident late last season, his broken arm shelved him for the last eight games of a season the Bengals failed miserably in the red zone.

One thing Owens can do is score touchdowns and get down the field. His 14.9-yard career average per catch teamed with Bryant’s 15.3 gives The Ocho and his 14.5 something he hasn’t had since 2007: Another regularly-used wide receiver that averages more than 12 yards per catch.

The big stat? Palmer completed just five passes of 40 yards or more last year while the 6-3, 225-pound Owens caught five by himself in the struggling Bills offense. Even at age 36. It is that ability to still separate that the Bengals saw on film during the free-agent process back in March and what Palmer has seen in his recent workouts with Owens in California.

“He’s a big, strong, physical, very explosive player,” said a very clearly excited Bratkowski on Tuesday night, already in Georgetown. “We now have a very talented group. They’re big, they’re fast, they’ve got experience. It’s excellent. But we’re still not going to get away from what we are. We are a big, physical running team and that’s what we’re going to do. But they can’t stack it up on us now and double Chad like they have been.”

He says going off experience and accomplishments, The Ocho, Owens and Bryant have to be the first three receivers but it’s unclear who would start opposite The Ocho. Contrary to published reports, Bryant is not going to start the season on the physically unable to perform list (PUP). After the Bengals were satisfied with a checkup of Bryant’s knee two weeks ago in Arizona, he’ll be on the field Thursday morning for practice, which makes him ineligible for PUP.

Although Bryant rarely played the slot during his previous seven seasons in the league, the Bengals used him there this spring and liked what they saw.

“It’s good because we can get all three guys on the field at the same time with Antonio able to go inside and outside,” Bratkowski said.

Asked about there being only one ball to satisfy such a vocal and diverse group of weapons, The Ocho said, “That’s for Coach Brat and Coach (Marvin) Lewis to figure out.”

“I think it’s going to be fun. You win and everybody is happy,” he said. “These guys are veterans who have been around and know how to play the game. I think there’s going to be a lot of energy from these guys. They’re confident, self-assuured, outgoing. Life is too short to worry about all that other stuff. Let’s play. Let’s win.”

Palmer isn’t exactly a stranger to working with egos and quick tempers and frustration.

“Carson is the guy who ultimately decides where the ball is going to go,” Bratkowski said. “He’s the ideal guy for this. He’s calm. He’s got the great demeanor, and he’s great staying with guys and working with them. I think he’s perfect for it.”

The concern is what kind of impact Owens’ mercurial and volatile personality is going to have on the locker room. He was getting fined and getting his team penalized for end-zone celebrations when The Ocho was in junior college. The Eagles once sent him home in the middle of a season for conduct detrimental. He’s thrown more quarterbacks under the bus than Deacon Jones. He once spit in the face of cornerback DeAngelo Hall at the end of a play.

But his new owner, new head coach, new quarterback and new teammates are giving him the benefit of a doubt. It is a locker room where supposed cancers like Cedric Benson and Tank Johnson have flowered into good influences. Guys like left tackle Andrew Whitworth, who served as an offensive captain last year with Palmer, have learned not to judge by sound bites.

“We’ve got a strong locker room and I don’t see anything negative that can happen,” Whitworth said. “Terrell’s a great player and the bottom line is that he can help our team. He makes us better, so we welcome him. It’s exciting. With Antonio he gives Carson another weapon and from what I hear Carson has been working out with him and says good things about him. That sounds good to me.”