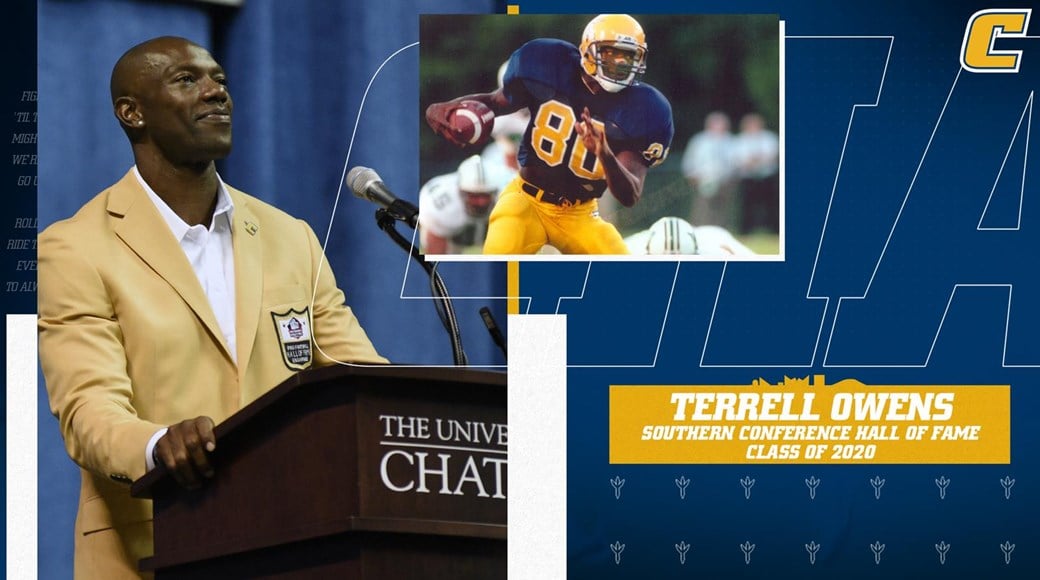 Former University of Tennessee at Chattanooga football standout Terrell Owens is a member of the 2020 class of inductees into the Southern Conference Hall of Fame, the league office announced this week.

Owens is the third former Moc to be inducted into the SoCon Hall of Fame. He joins women’s basketball standout Regina Kirk (1984-88) and cross country and track & field All-American Shannon Womack (2002-06) who were both inducted in 2011.

Student-athletes who competed for a minimum of two seasons in the Southern Conference are eligible for consideration, along with coaches and administrators who spent at least five years in the league.

A pool of more than 200 candidates from the conference’s current and former member institutions were nominated for consideration. The pool of former student-athletes, coaches and administrators was cut down to 40 individuals who comprised the final ballot. A voting panel of 20 media members and league administrators made the selection of the induction class.

ABOUT THE INDUCTEES
Terrell Owens, football/men’s basketball/men’s track & field (Chattanooga, 1992-95)
One of the most prolific wide receivers in NFL history, Terrell Owens was inducted into the Pro Football Hall of Fame in 2018 after a 15-year career that saw him earn six Pro Bowl and five All-Pro selections. Owens finished his NFL career with 15,934 receiving yards and 153 receiving touchdowns, ranking second and third in NFL history, respectively, and was named to the NFL’s All-Decade team for the 2000s. Owens had nine catches for 122 yards for the Philadelphia Eagles in a Super Bowl XXXIX loss to the New England Patriots, memorably returning from a broken leg and torn ligaments suffered just seven weeks prior. A member of Chattanooga’s 2002 Hall of Fame class, Owens finished his collegiate career as the program’s leader in receiving yards (2,320) and receptions (144) and was second with 19 career TD catches. He is fourth in school history with 16.1 yards per catch and led the Mocs in receiving in each of his final three seasons, playing in the 1996 Senior Bowl. Owens, who had six career 100-yard receiving games and was a first-team All-SoCon selection in 1995, was also a member of UTC’s basketball and track and field teams, helping the hardwood Mocs to SoCon regular-season and tournament titles and NCAA appearances in 1993-94 and 1994-95.

Lynne Agee, women’s basketball (UNCG, 1981-2011)
Lynne Agee retired following the 2010-11 season with a career record of 602-334 in 33 seasons, 30 of which were spent at UNCG. Agee went 556-311 at the helm for the Spartans, including a 220-192 record in 14 years in the SoCon, a mark that leaves her fifth in league history in wins. With a 149-111 SoCon record, she ranks third in conference wins. The first-ever coach to lead a team to the NCAA tournament in all three divisions, Agee guided UNCG to the 1998 SoCon tournament title and runner-up finishes in 2000, 2001, 2002 and 2006. She directed the Spartans to SoCon regular-season titles in 1998-99 and 2001-02 and runner-up finishes in 1997-98 and 2005-06. A two-time SoCon Coach of the Year and a recipient of a SoCon Distinguished Service Award in 2010-11, Agee coached two SoCon Preseason Players of the Year, the 2004-05 SoCon Freshman of the Year, the 2008-09 SoCon Defensive Player of the Year and two tournament Most Outstanding Players. In addition to her team’s success on the court, Agee’s squads excelled in the classroom, as she mentored 27 Academic All-SoCon selections in her tenure. Agee was the first active coach to be enshrined in the UNCG Athletics Hall of Fame in 2004 and saw the court at her longtime home venue, Fleming Gymnasium, named for her in 2011. She becomes the first UNCG inductee into the SoCon Hall of Fame.

Eric Breitenstein, football (Wofford, 2008-12)
A first-team All-American in each of his final three seasons, Eric Breitenstein finished his career as Wofford’s career rushing leader with 5,734 yards, a mark that ranks second in SoCon history. The fullback set the SoCon’s single-game rushing mark with 321 yards in a win over Elon in 2012 and surpassed his own single-season school record with 2,035 rushing yards that season, second-most in league history. Breitenstein, who first set the school record with 1,639 rushing yards in 2010, finished his career with 32 games with at least 100 yards rushing, including an NCAA-record-tying 11 straight in 2012. He ranks fifth in SoCon history in career rushing yards per game (114.6) and all-purpose yards (5,843) and is second in career carries with 912. Breitenstein is also third in SoCon lore with six 200-yard rushing games, 65 touchdowns scored and 65 rushing touchdowns and is fifth in career scoring (390) and seventh in yards per carry (6.3). A two-time SoCon Offensive Player of the Year and the 2012-13 SoCon Bob Waters Male Athlete of the Year, Breitenstein helped the Terriers reach the FCS playoffs and finish in the top 15 in the national rankings in each of his four full seasons. Breitenstein was inducted into Wofford’s Hall of Fame in 2017 and had his No. 7 jersey retired by the school in 2019.

Rod Thorn, men’s basketball/baseball (West Virginia, 1960-63)
A two-time SoCon Male Athlete of the Year in the early 1960s, Rod Thorn was part of a West Virginia dynasty in the era, helping the Mountaineers to a combined 70-18 record from 1960-63 that included a 34-4 SoCon mark. Thorn helped WVU to three SoCon regular-season titles and two tournament crowns, claiming MVP honors twice, and helped the squad to a run to the NCAA regional semifinals (later known as the Sweet Sixteen) in 1963. Thorn averaged 21.8 points and 11.1 rebounds per game in his career, which rank fourth and third in program history, respectively. One of just three players in program history to have his number retired, Thorn established six school records and finished with 1,785 points in three seasons, good for third at the end of his career. Thorn also played baseball for the Mountaineers, helping the squad to a 66-21 mark and three SoCon titles with three NCAA appearances, and was inducted into West Virginia’s athletics Hall of Fame in 1992. The No. 2 overall pick in the 1963 NBA Draft, Thorn enjoyed an eight-year playing career in the league before transitioning to coaching and then the front office. The 2002 NBA Executive of the Year, Thorn enjoyed a lengthy career serving as a general manager and team president and working in the league office and was inducted into the Naismith Memorial Basketball Hall of Fame as an executive and a contributor in 2018.

Wayne Tolleson, baseball/football (Western Carolina, 1974-78)
A middle infielder who fashioned a 10-year MLB career with the Texas Rangers, Chicago White Sox and New York Yankees, Wayne Tolleson was two-sport star at Western Carolina, earning spots on the SoCon’s 75th Anniversary Baseball Team and the Western Carolina All-20th Century Football Team. The Catamounts’ first-ever Southern Conference Male Athlete of the Year in 1977-78, Tolleson was a two-time All-SoCon selection at shortstop and the 1978 SoCon Player of the Year in baseball and earned all-conference honors at wide receiver in 1977, the first season Western Carolina played a SoCon schedule after joining the league in 1976. Also a two-time All-Atlantic Region pick in baseball, Tolleson hit .340 with 58 stolen bases in his two SoCon seasons in that sport and finished his collegiate career with 10 WCU season and career records. He led the SoCon in stolen bases in each of his two seasons in the league, swiping 29 both years. On the gridiron, Tolleson led the nation in receptions per game in 1977 with 6.6 and led the SoCon with 100.1 receiving yards per game. His 73 catches and 1,101 yards that season were school records. Tolleson made his MLB debut with the Rangers in 1981 and spent the first five years of his career with the organization before being traded to the White Sox after the 1985 season and then to the Yankees in the 1986. He was a member of Western Carolina’s inaugural Hall of Fame class in 1990.