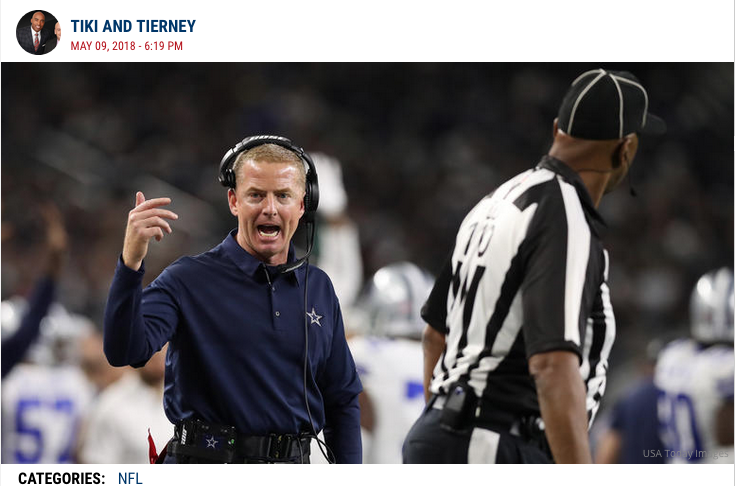 T.O. shared his candid thoughts on Jason Garrett and Odell Beckham Jr., among others

Owens has doubts about both, especially Garrett, who has just one playoff win in seven seasons with the Cowboys.

The key players for the bulk of that era are gone. Tony Romo and Jason Witten have retired. Dez Bryant was released.

Why is Garrett still the coach?

“I have no idea,” Owens said in studio. “At some point, you’re going to run out of people to blame, especially when you talk about players. Management is going to have to take a close look at who’s leading the team. Sometimes the players are a byproduct of the head coach. They take on that personality.”

“Offensive-minded coaches, they tend to really be explosive on the offensive side of the ball,” said Owens, who played for the Cowboys from 2006-08. “When you look at the guys that were on offense, if they’re not able to win games or get into the playoffs and get deep into the playoff, then it has to be something. It can’t be just the players. It has to be the head coach. . . . It can’t just be me. It can’t be Dez. Romo is gone. Witten is gone now. Who else can it be?”

OBJ, meanwhile, is perhaps the most talented wide receiver in football but sometimes makes headlines for all the wrong reasons. Owens, who was no stranger to controversy during his playing days, said he is concerned about OBJ “just a little bit.”

“I think that’s where you pull him into the office and you speak to him,” Owens said. “I think sometimes it takes something drastic to get someone’s attention. You would think with that injury, maybe that would get his attention. But I think he has to just take some time to really rethink some of the things he wants to do and how to go about doing that. Obviously these distractions that we’re mentioning, that can’t happen, especially if he’s soliciting big money because teams are not going to pay him that. He has to police himself. At least play the game until you get paid.”

While Owens sometimes garnered negative attention, there was never any doubt about his desire to be the best wide receiver in the game. Tiki and Tierney aren’t sure if the same can be said about OBJ.

“We’re just in a different era where social media has really taken over millennials,” Owens said. “I think I would have (been fine in this era) because I had that drive. Once I really realized that I could be something special, that’s what really kind of drove me. I started in high school and college being average and progressed to good. Once I got in the league, I was kind of good and I had the coaches that really stayed on me. I really wanted to be better than when I came into the league. I wanted to be in that conversation of great. So I had to go from being good to great. It was really that work ethic that put me over the hump.”