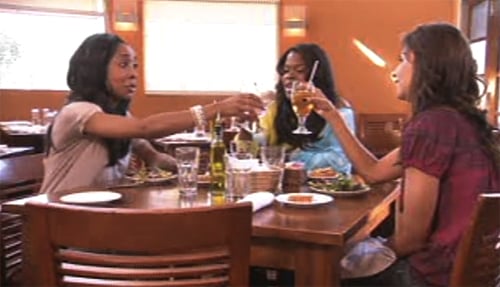 Last week Terrell vowed to start fresh in his on-again, off-again relationship with Kari. But their past infidelities, as well as his difficult childhood, threaten its success. The second half of this week’s T. O. Show finds Terrell fighting those patterns. He visits a therapist to talk about his history with Kari, his children, and his own father.

As Terrell mentions in his autobiography, Owens’ father had lived across the street from him, and neither he nor his mother had ever told him until Terrell had developed a crush on a neighbor girl, who turned out to be his half-sister. So yeah, he has some issues.

Those issues come out during the clip above, where Kari angrily questions his desire to change. Terrell decides to “put it all on the table” by first clearing the table. Somehow this metaphor turns literal when he slides and smashes a table centerpiece, while Mo and Kita watch uncomfortably. Later Mo and Kita meet up with Terrell’s ex-fiance, Felisha Terrell, to have drinks, and to try to convince her to work it out with Terrell. Perhaps it’s because Terrell can’t stop arguing with Kari. Or perhaps it’s because Felisha’s married name would be just too perfect. Felisha Terrell-Owens definitely sounds right.