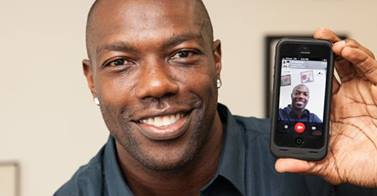 Football great Terrell Owens is in-between teams and hoping for a new sports assignment this fall. The former wide receiver for the San Francisco 49ers, Philadelphia Eagles and Dallas Cowboys is posting his workout videos on YouTube, and hangin’ with fans on mobile devices. Owens is a part-owner of the new Hang w/ (for “Hang with”) app, which streams live video from Apple and Android mobile devices. The app has more than 550,000 downloads to date. And he just started a new podcast, Time Out with T.O., featuring interviews with sports stars and celebrities. We hung out with “T.O.” — who has more than 3 million followers of his Facebook, Twitter and Instagram musings — at his manager’s office here, where we chatted about the app, his favorite devices and why he uses his iPhone to look for fashion tips.

“I’ve been trying to find some creative ways to be more social media savvy, and they brought this opportunity to me.” “They” were MEDL Mobile, a Los Angeles based app firm that has also developed apps like Athlete’s Tweet, (sports news from celebs) and App Incubator, a program that lets anyone make their own apps. Rapper Timbaland is also a co-owner.

“There are not a lot of apps that let you do live streaming. Once you tune in, this is actually happening. It’s not recorded, it’s actually live. Fans can ask questions, and I can respond. That’s what’s so unique about this.”

The iPhone 5 and BlackBerry Q10. He likes the BlackBerry keyboard for e-mail and texts, but prefers the iPhone for social media — and memory management. “Having two phones eliminates you using all the memory space.” But he has no plans to ditch his iPhone 5 for the new model, the 5s, which will go on sale Friday. “When is it going to stop? How many more new iPhones can there be?”

He can only imagine what life would have been like 10 years ago during the peak of his football career had social media existed. “Knowing how creative I was with my touchdown celebrations, I probably would have some of my late-night workouts out there, or asked for ideas. It’s amazing how advanced social media has become.”

— Snapchat (free; Apple and Android). The app that lets you share photos that can disappear within 10 seconds, is a daily must. “People like to see me pose with my shirt off. I get to control the number of seconds they get to see that, so it’s a teaser for some of the women out there.”

— Pinterest (free; Apple and Android). He enjoys the visual app as a spectator. “There are so many different pictures of me from the beginning of my career until now. It’s amazing how many photos are out there.”

— WhatsApp (free; Apple, Android, Windows, BlackBerry). He uses the communication app (free texts and international calls) to chat with folks out of the country.

— Gilt (free; Apple, Android). “I like fashion, and try to keep up with fashion trends. Who doesn’t like a sale?”

— VideoSnap. (99 cents, Apple devices). The app that lets you take photos while shooting video gets used to help train his 13-year-old son in basketball technique. “We went to the park and I videotaped him shooting free throws, so he could watch and learn.” With the app, you can slow down the footage for a better sense of what you’re doing.