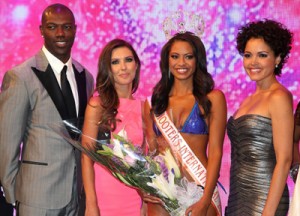 On June 27th, 2013, TO helped crown a new Miss International (Kentucky’s Marissa Raisor) at the 17th Annual International Swimsuit Pageant at the Hard Rock Hotel in Las Vegas. Terrell highlighted a cast of celebrities from all sports, including a former Miss USA and lieutenant colonel as well.

This year’s event was held at The Joint at the Hard Rock Casino & Hotel in Las Vegas. The pageant featured the top 60 Hooters Girls from around the world competing for over $150,000 in cash and prizes.  Along with TO, other guest judges included model and actress Audrina Patridge, Chuck Liddell, Cynthia Bailey, Jay Williams, Lance Smith, Lt. Col. Jason Amerine and Susie Castillo. Bruce Buffer lent his voice to the evnt, while Chael Sonnen and Kenny Florian emceed.

During Pageant week, the contestants had photo shoots with Hooters Magazine and Calendar photographers. Along with the $30,000 cash prize for Miss Hooters International, there are a number of ways for girls to win including Top 10 Winners, Viewer’s Choice, Miss Photogenic, Miss Congeniality and Miss World chosen from the international contestants.