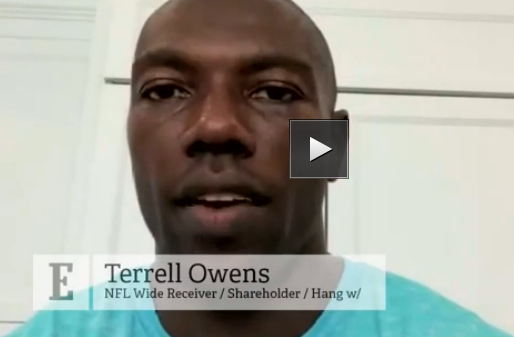 In Part 1 of this Google Hangout, Owens discusses his investment in a new app. Below, Andrew Maltin, the app’s creator, gives tips on locking in celebrity investors.

NFL star and six-time Pro Bowler Terrell Owens, along with rapper 50 Cent, hip-hop producer Timbaland, Larry the Cable Guy and DJ Kaskade, are among investors in Hang w/, an app which acts like a “live video Twitter,” according to Andrew Maltin, co-founder and CEO. Hang w/ enables celebrities to “hang with” with their social media followings and each other via live-streaming video and chat.

Hang w/ made a splash when 50 Cent shared an exclusive concert at this year’s SXSW using the social platform. In addition to its celebrity shareholders, it has attracted more than 500 celebrity users since its launch in May 2013.

Overall, Hang w/ has reached millions of users who can follow each other and whoever interests them. They’re notified when a star broadcasts live, so fans can feel like they’re backstage with 50, in the recording studio with Tim, or lifting weights at the gym with T.O.

In Part 1of this Google Hangout, Owens explains why the app brings engagement with his fans to a whole new level.

Meanwhile, Maltin says partnering with Owens and other celebs to become investors required tireless networking and a ton of patience. He calls his celebrity outreach approach the “peel-back strategy,” which requires passing through layers of publicists, agents, managers and lawyers. “They all play a role in these deals so the sales cycle is much longer when dealing with celebrities than the average investor,” he adds.

Maltin, a serial app creator, tapped a decade’s worth of networking at tech and entertainment industry events. He expertly navigated various management teams to book meetings with stars then masterfully pitch Hang w/ as an authentic platform for connecting with fans.

“It’s a unique crowd to work with,” says Maltin.  “They pose different challenges in that they’re surrounded with others supporting them so getting through the layers is a challenge, especially when it involves a deal related to their own money.”

He says because their celebrity investors also act as brand ambassadors, his team has to be just as particular about celebrity partnerships. “We want to make sure they can create compelling content on the video stream and are attentive about engaging with their fans.” Maltin adds that he specifically targets personalities with strong followings, and then narrows it to those who display high interactivity with fans via social media.

Stay tuned for Part 2 of our Hangout with Owens, where he discusses other ways he’s sinking his teeth in new business avenues.

Related: Are Celebrity Investors Worth the Hype?