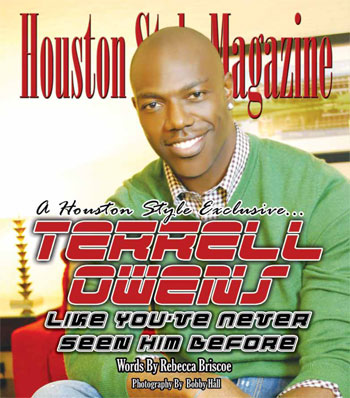 When his six foot three muscular frame walked into the room, I had no idea if I would be interviewing the mild mannered Terrell Eldorado Owens or the very outspoken T.O. Thanks to the ambience and world class treatment from the Renaissance Hotel-Dallas I knew that the luxurious décor would set the tone for our first encounter.

I had to pinch myself because I couldn’t believe that I, a small town girl from Port Arthur, TX would embark on an exclusive interview with someone whose athleticism was a marvel, competitive nature was unrivaled, and confidence was his weapon of choice. Growing up, I was always taught that you can never judge a book by its cover, and everyone is entitled to a second chance regardless of their past decisions–which was clearly my motivation to obtain a personal one on one time with Mr. Owens. Once I witnessed Terrell’s million dollar smile mesmerize the room, I knew we would embark on something special.

Most people don’t realize that his competitive nature, motivation, and drive are not a recipe for arrogance, but a derivative of his spiritual beliefs and his unconditional love for his family.  Providing a better life for his siblings, mother, and loving grandmother was always the stimulus for Owens’ to continuously exceed expectations on the football field; not weekly stats or press conferences. The 6x All-Pro wide receiver expressed to me that he is not holding any grudges for mistakes he has made in the past, but looking at them as life lessons to reinvent himself for a better future Most football fans would have considered his transition from the NFL to the IFL as a demotion; however Terrell used that time to rebuild his brand, optimize his speed and strength with the anticipation of another NFL debut. Not only was he a player on the Allen Wranglers roster, but was also a co-owner of the team where he was valued as a consultant for on and off the field operations.

When I asked Owens would he consider himself a mentor, he expressed with conviction that he does not consider himself a mentor, because he is using this time for growth.  Never one to shun away family and friends, Owens’ always maintains a listening ear for NFL veterans and rookies. He is also using this time to support many non-profits, charities, and promote advocacy for The Alzheimer’s Association.

Besides having his football career remain a priority, he is focusing on a bevy of other projects such as: acting, fashion, and interior design. His mild mannered countenance expressed that his acting skills are in its beginning stages where he made his motion picture debut in Dysfunctional Friends, and guest starred in last year’s Single Ladies. His fashion sense and undeniable swagger has made Owens one of the most sought after athletes on the red carpet, and his witty laugh was only confirmation that he knew that was the truth. Interior design has also presented a new chapter in his life. His love for texture, color, and textiles will hopefully make him a household name with his Loft 81 brand that he foresees will be in retail stores this year.

Terrell’s humble presence was a wonderful confirmation that no matter what his circumstances are, he is resilient. Failure is simply not an option for one of the most vocal athletes on and off the football field. That day I didn’t sit down with a man that was pre-occupied or self centered, but a man who realized that he has made mistakes. He is proactively taking control of his future by using those trials and tribulations to rebuild his career, business endeavors, and become a better father to his four children.

Look for the exclusive video interview on www.stylemagazine.com