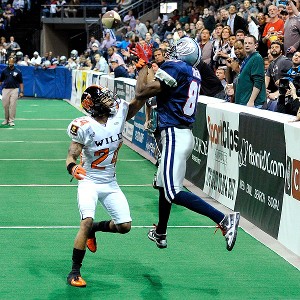 Owens, who was named MVP of the game, caught touchdowns on all three of his catches. The game, which was shown on ESPN 3, was the highly- publicized first game of Terrell Owens IFL career after coming off an NFL career that spanned over 15 seasons. Owens’ who was a six time NFL Pro-bowler had a successful debut in the IFL as he finished his first game with three catches for 53 yards and three touchdowns.

“I’ve always prided myself on being a playmaker,” Owens stated,” whether it’s [in] this league, or the NFL.”terrell owens scores td for wranglers

The game started, to a record attendance crowd of 5,711 at Allen Event Center, as both teams traded field goals. Wild Quarterback Phil Staback scored the first touchdown of the game on a one yard run ran to make the score 10-3 and that was the only time the Wild led for the entire game. Wranglers Cornerback Frankie Solomon returned the following kickoff 50 yards for a touchdown. The first quarter finished tied 10-10.

The second quarter belonged to Wranglers’ WR Terrell Owens. Owens, who was targeted five times and caught three passes during the game, caught two touchdown passes in the quarter alone. The first was a 10-yard pass from Quarterback Bryan Randell. The second was 27-yard strike in to the endzone. This helped the Wranglers take a halftime lead 24-17.

The third quarter was marred by inconsistent offensive play by both teams. The only score was an 18 yard field goal by Wichita Kicker Dylan Pohlman. Scoring was rampant in the fourth quarter, however only by one team. The Wranglers scored on four consecutive possessions in the fourth to take command 50-23.

In the middle of the fourth, Wild Quarterback Phil Staback threw an interception that was returned for a touchdown by Allen CB Frankie Solomon Jr. This started a streak of 19 unanswered points by the Wranglers.

Staback, who led the Wild to win 6 of its last 9 games last season, finished the game completing 24 of 50 passes for 262 yards two touchdowns and three interceptions. Two of those interceptions occurred in the fourth quarter.

Wranglers Quarterback and 2010 IFL MVP did not have a great game in his debut return to the IFL for the 2012 season. Randall completed just 6 of 21 passes for 108 yards 3 touchdowns and 2 interceptions.

CFL phenomenon Casey Printers entered the game late in the fourth quarter and added an additional touchdown for the Wranglers making the score 50-23.

The Wild must now prepare for another road game against the Omaha next week. The Wild’s first home game is on Friday, March 9th.The Wranglers will now prepare to be on the road for more than a month, on a four game road stint, before they return home on Saturday, March 31st.