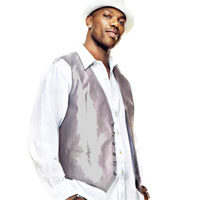 Every Sunday night, Terrell Owens fans are glued to the television screen watching the football star’s every move. The charming wide receiver spoke briefly to ESSENCE.com about the second season of his reality show, “The T.O. Show,” why this season is better than last, and the one thing a few of his teammates are copying from him.

ESSENCE.com: Do you have any surprises on the show?
TERRELL OWENS: [Laughs]. With me you can always expect some surprises, but I can’t give them away. That’s why it’s called a surprise.

ESSENCE.com: What will be different from last season?
TERRELL OWENS: It will dig a little deeper into things that I am involved with, such as my personal life, my kids and a lot of business opportunities that I am trying to get into.

ESSENCE.com: What will people learn about you from the show?
TERRELL OWENS: A lot of people don’t know that I decorate my own places. I pick out the paint colors, buy the bedding accessories, and pick out my own furniture. I really enjoy designing my own home. I mean, it is less expensive. You know, going out and getting a designer and paying that person a fee on top of money spent to get things that you want for your place. I might have even a couple of teammates that might bite off my style a little bit.