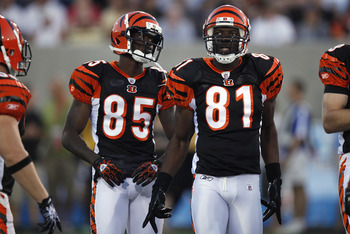 Cincinnati Bengals wide receiver Terrell Owens will line up against the same Buffalo Bills team he was a member of last year when the two teams face each other Friday night at Ralph Wilson Stadium in Buffalo, it is the third preseason game, which is the one the starters typically play the most, which means the action should be crisp for both sides.

Owens only played one season in Buffalo, but he made some good friends on the Bills and ow he will try to burn them for touchdowns, specifically cornerback Terrence McGee. He’ll try to do it again for real back in Cleveland at Paul Brown Stadium in Week 11, but the Bills’ secondary has an idea what to expect, as Chris Brown of BuffaloBills.com delved into.

“I haven’t gone against him in a while, but during the season I definitely got a good feel for him with his speed and the stuff he does at the line,” McGee said. “He does different stuff than most receivers. He’s more aggressive at the line, especially with smaller corners like myself. He still is a big playmaker and you’ve got to get ready to play.”

Meanwhile, on the other side of the field for the Bengals is one Chad Ochocinco, who talks even more than Owens and is just as dangerous a receiver, but in a different way. Ochocinco uses his quickness and agility more than he does his strength and is not as physical of a receiver as Owens, which means the two of them should compliment each other well.

As for having gained any insight into how Owens runs his routes by practicing against him all of last year, safety Bryan Scott admitted that there won’t be so much of a “mystique” surrounding Owens this time. But just because he might be up there in years, that doesn’t mean he still doesn’t put a scare into opposing defensive backs.

“It’ll definitely be good to see him, but it’s no fun and games out there trying to cover him,” McGee said. “You definitely don’t want to get beat deep or beat for a big play. I will not smile if a deep route is caught on me. It would not be fun and games.”

Well, maybe for Owens it would.