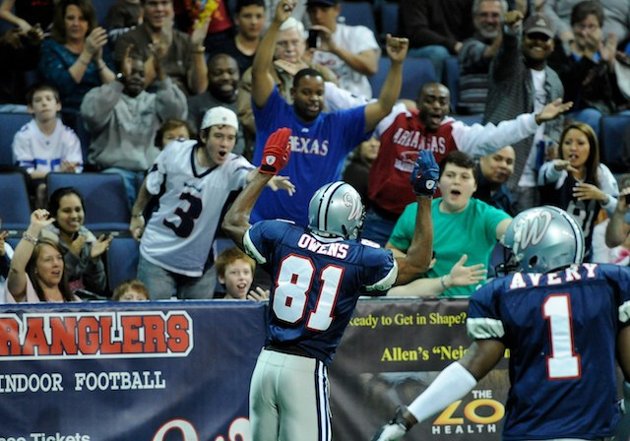 The last time Terrell Owens scored three touchdowns in a professional football game was five years ago in a nationally televised game played in front of 63,000 fans at sold-out Texas Stadium. In his return to the sport on Saturday night, the former NFL star matched that scoring feat on a much smaller scale.

The Dallas Cowboys star on his helmet was replaced with a curly W. The opposing team wasn’t the hated Washington Redskins, but the alliterative Wichita Wild. And when T.O. celebrated in the end zone three times, he did it in front of 5,700 fans and a few hundred empty seats at the Allen Events Center.

T.O. made his Indoor Football League debut for the Allen Wranglers this weekend, catching three passes, all for touchdowns, in his first professional arena game. Though he was a drawing card for the team — the 5,711 fans in attendance were said to be more than the team had for their entire home schedule last year — the lack of sell-out must have been disconcerting for a team that had hoped to make Owens the must-see ticket in town.

Catching passes from a quarterback making $225 per game (and $25 more for a victory), Owens looked at ease on the small, indoor field. He didn’t catch a pass in the second half, but the three first-half TDs were enough to earn him player of the game honors.

Owens has a 50 percent ownership stake in the team. The roster is largely made up of former college players, some fairly well-known (quarterback Bryan Randell broke passing records at Virginia Tech) and some less so (Doug Pierce, who led the Wild in receptions, starred at the NAIA’s Friends University).