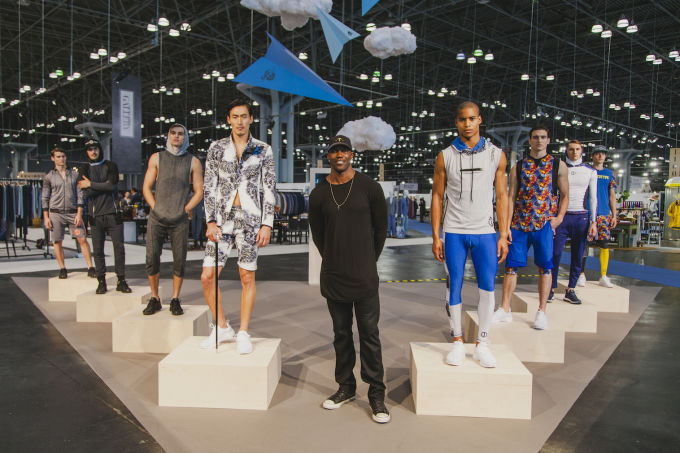 “I’m used to being in the light, bro,” Terrell Owens says to a photographer who’s asking the former football star to step out from under a glare so that he can grab a better shot. Owens was anything but out of the spotlight during his entire football career. Whether he was racking up almost as many yards as anyone in NFL history (he’s second only to the GOAT Jerry Rice) or crying over his quarterback, Owens was a player you couldn’t keep out of the headlines.

Now, Owens is presenting his new brand Prototype 81—a callback both to his name (more on that later) and to the number 81 he wore as a player—to a crowd of press at the front of the MRket show in NYC. He’s practicing what he’s selling and wearing an athletic extended black tee that looks just as fit for a workout as it does to imitate a slouchy Rick Owens piece from afar. Owens calls Prorotype 81 a “fashion-forward sports luxury line” and one that reflects the bold personality he brought to the league. The former receiver is also putting his hours in the gym to good use, incorporating what he wants as an athlete into the line. Read out interview with T.O. about the new brand, best-dressed athletes, and the similarities between design and football. Can you give us a quick rundown on Prototype 81?
This line is a fashion-forward sports luxury line. It’ll consist of some active and some functional type pieces. Some to-and-from pieces that you can wear to the gym and from the gym, depending on how in a hurry you are. There’ll be three components to my line. There’s your core, your active, and your exclusive. And your exclusive line, which is like your guy in the middle [he gestures to a man in a suit carrying a cane], is more of your fashion-forward pieces. Again, everybody knows me for being fashionable, everybody knows me for being an athlete, so I’m really trying to marry the two. So this is literally where fashion collides with performance.

Prototype, I came up with the name. Obviously, you can’t spell prototype without my initials, T.O. Try to spell prototype without T.O. And when I came out of college, that’s how GMs and managers and scouts categorized me to describe me as a prototypical-type receiver, so I was trying to come up with something that really reflected my persona at the same time once I got into the league.

Is the cane part of the line, will that be for sale?
No, but if you want it to be, we probably can include that. It’ll depend on how the response is. I may have to give it to the cane business. But it’s definitely a good accessory to that fashion piece there. Again, you can see with the color blocks, this is something different, it’s something unique, it’s fun. That’s me. It’s something that reflects my football persona. The line really isn’t just for athletic, skinny people. I want my line to inspire and motivate people of all shapes and sizes. I want to embrace the curvy women, the skinny-fat consumer as well.

So you said it’s kind of a reflection of your personality, your playing style. Is that why it’s pretty colorful, pretty bold?
Yeah, absolutely, again that’s where fashion is going. You’ve got to be able to step out there on a limb. You’ve got to be able to stand at the cliff and see that anything kind of goes. You’ve just got to be confident in who you are, not anything goes, but you’ve got to be confident in what you’re putting out there in the market. And I feel very confident in myself, in my abilities as a football player. I’ve had a great team that I’ve talked extensively to about the direction, the vision of my line, and this is just a sample, a snippet of the collection.

I’ve basically tried to take the blueprint of what Lululemon has done for women with the yoga pants and expand it into somewhat of a lifestyle. That’s what I want to do and provide for a lot of the males out there. You talk about it being a team effort, are there similarities you can draw between your football career and this?
Yeah, absolutely. My team will tell you, I’m always using football analogies and I’m educating them into my world of football, as well as the designers, they’re educating me in the process of fashion. So I don’t claim to know everything. Fashion is always evolving, so I’m always trying to learn trend forecasts and I have a great team of people to help me with that process, so I’ve been very hands-on. Being in L.A., being in the fashion district, sourcing different fabrics, zippers, trims, things of that nature.

A lot of sweat equity for sure, just learning about four-way, two-way fabrics. The modals, the heather pontes, the pontes, the tri-blends, poly-rayons, and nylons, everything. So, it’s been an incredible process. This is definitely, I’m sure, not the thought process or realm that people ever thought I would get into, but how could you not? I’ve been a fashion-forward guy and I want to try to embody and take advantage of how people really perceive me.

Why do you think there’s been such a recent explosion of athletes getting into fashion, maybe not launching their own brand, but at least making a name for themselves in the fashion world?
I mean, everybody likes to look good. And I think it translates into your mind, body, and soul. If you wake up in the morning and you’re dressing and you like what you put on, you feel good. And for athletes, we don’t want to be caught by the fashion police, even though some are. Some people are a little bit out there, you think of your Russell Westbrooks, he’s a fashion-forward guy, but again, you want to look good, you want to feel good, it’s something when you wake up in the morning, you want to embrace.

Are there athletes out there who you think dress well?
Yeah, I mean there’s a number of guys. There’s a lot of guys who are very conservative and look very classic and clean, then you have those guys like your Antonio Browns and your Russell Westbrooks that really step out. Even your Cam Newton, you saw what he wore Super Bowl weekend. So again, that shows you he’s a guy that’s very confident. If you’re not confident in yourself, you’re not going to wear those pants. You’ve got to put it on, you’ve got to rock it, you’ve got to embrace it.

And so those are some of the things, I’m telling you, when you see some of these trendsetters. Just like me with football and my celebrations, people have looked at me as a trendsetter. They feel like now there’s a void missing; that excitement from football. So again, I’m trying to bring that excitement to the fashion world and really just trying to utilize the pioneers that have really paved the way for my brand and many other brands that are out there in the marketplace. So, are there people you would say wouldn’t dress so well? Or is it just about wearing it with confidence?
I mean, yeah, again, a lot of people criticize what Russell Westbrook has worn some of the times. I even question some of the things that he’s worn, but he’s a guy that’s confident, he doesn’t care what anybody says and he rocks it. So again, confidence is key. And you’re attire is an extension of you. It communicates without really saying anything.

How was it hopping onto the design side? Do you think you took to it pretty quickly?
I think you’ll probably have to ask my designers. I think that’s probably what more so impressed them is just the process and how involved with everything I was. Again, utilizing their design background, their knowledge, and then grasping what I feel is fashion, what I like, and incorporating it. They’ve really taken my vision and my direction and brought it to life. So it’s one thing to put things on a cab or have something aesthetically look good on a computer or a board, but those things have to come to life and once they come to life, that’s when you tweak and make some corrections to the visions here and there. You play with designs, you play with color blocks, that’s how you get Prototype.

Do you think it’s especially important, as athleisure is blowing up, for athletes to put themselves into this world?
Well again, this is for me I think, I don’t know if this is accurate or not, but I’m probably one of the first athletes football-wise that has really been behind their brand or started their own brand. I know Kevin Willis, the basketball player, is doing some of the same things, but football-wise I don’t think anybody has done that. So again, this is athlete-inspired.

Do you think because you know what it takes, you’re in the gym more than anybody else, so you know more what people want to wear?
Yeah, exactly, even with some of the pieces there, like with the guy in the hoodie with the mock neck with the zipper across the chest, it has a nylon pocket in there so if you want to work out, you want to bench-press, or you want to go for a run, people are always stashing their phone in the side, or women are stashing stuff in their bras. So that’s a compartment where they can put their phone, still jog, it’s not going to go anywhere, so that’s one of our active functional pieces. These are things that I see in the gym that I try to cater to. So they can make working out enjoyable instead of having their phone tangled with the wires and things of that nature.