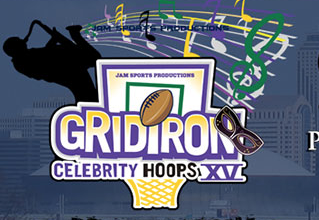 This Gridiron XV game highlights the creator and executive producer, Juli Jordan’s, personal achievement as the very first African-American and first woman in the 93 year history of the National Football League and the 47 year history of Super Bowl to produce an event annually held during the Super Bowl weekend to reach the 15 year mark. The event production company is minority-owned and the first to reach this major milestone and outstanding achievement.

“I am extremely excited that Gridiron Celebrity Hoops has reached 15 seasons of production. There is a great joy in being a first. But this year’s anniversary is my opportunity to recognize those who have been so kind to me over the many highs and lows, struggles and triumphs of keeping this event alive for a decade and a half. Terrell “T.O” Owens has supported our cause and charitable efforts all 15 years! We are very fortunate to have his loyal and dedicated service to the betterment of abused children.” expresses Jordan, CEO and President of Jam Sports Productions and Founder of non-profit organization Juli’s Kids Motivated to Succeed. “I believe that dreams do come true; that long shots can become sure shots and that’s why we strive to benefit, enrich and inspire youths in foster care waiting to be adopted and dreaming of a brighter future.”

This unmatched competition remains one of the most anticipated events held annually the night before the Lombardi Trophy is won. It is also the first and only charity celebrity basketball game to have ever become officially sanctioned by the National Football League. Now independently produced exclusively by Jam Sports Productions, Gridiron Hoops XV is where pro football players and A-list celebrities play in a thrilling game of action packed basketball.

Gridiron Hoops XV is proud to take place at Xavier University of Louisiana, the nation’s only historically Black, Catholic University, during Black History Month as the game celebrates its own history making achievements.

The game starts and the fun begins at 7pm. Ticketholders will experience special presentations, an unparalleled slam dunk contest, interactive games, opportunities to meet celebrities, get their autographs and take pictures, as well as eat good food, and hear great jazz bands.

Philanthropically conscious, the event continues to be a fundraiser to raise awareness, and share information on protecting children and teens who have suffered from abuse, neglect, homelessness, violence, instability, and more. The game benefits the non-profit organization, Juli’s Kids Motivated to Succeed (Juli’s Kids). This year, youths cared for by the Department of Children and Family Services of Louisiana (New Orleans Division) (DCFS) and Catholic Charities Archdiocese of New Orleans will be able to come to the game as the event’s true MVP’s (Most Valuable People).

Gridiron Celebrity Hoops is produced by Jam Sports Productions, LLC and presented by my Oh! spot, a premium organic food and beverage company. Sponsored in part by Under Armour. To assist the community, Budget Mobile, in conjunction with Lifeline.gov, a government benefit program that provides free phones and free cell minutes, will be outside of the arena all day to provide wireless services to qualifying low-income consumers.

For more information on celebrities participating in the game and to purchase tickets, (ranging from $20 to $300) visit www.footballhoops.com or call 301-868-8856. Reserved VIP Courtside Seats are $300 and include special backstage access to the celebrities. For media credentials and credential requests contact PRnews@jamsports247.com.