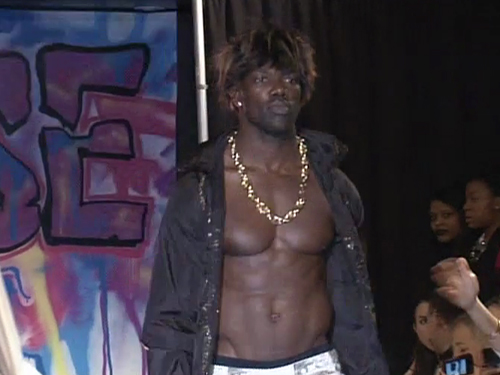 At the end of his disappointing football season, Terrell Owens said it was time for him to try other things, like modeling. Of course every celebrity tries modeling, but not every celebrity is 8 feet tall and has 15 abs (I checked his stats). So for this episode of the T.O. Show 2 he and Kita fly to New York for Fashion Week (Mo stays behind because she’s pregnant and “too big,” which is enough to get you kicked out of a Marc Jacobs show). Terrell is in town just to meet up with his new agent and watch some shows, but he is asked to walk the in Heatherette show just hours before showtime. In this clip, Terrell prepares for the show, while comparing runway modeling to the thing he knows best: football. The Heatherette show is like the Superbowl, and the chaotic backstage is just like the locker room, Terrell explains. It’s also probably hard to tell which event sees more butt pats.

Kita also grabs coffee with Terrell’s first season love interest, model Jessica White. Together they discuss Terrell’s issues, which includes his inability to find and date a black woman, according to Kita (something others have noticed as well). White says that Terrell just needs to do whatever works for him. Apparently what works for him just doesn’t work for Kita and Mo.