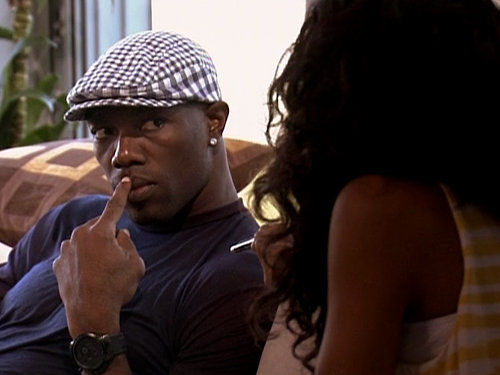 This week’s T.O. Show 2 finds Terrell Owens and friend/publicist Kita Williams traveling together again. This time they’re down in Miami, attending the Miami Masters and cheering on Terrell’s friend Andy Roddick. Andy and Terrell used to party together, until Andy got married and settled down. Later, over dinner, Terrell says seeing Andy so happy makes him think, once again, about settling down.

Many have wondered if that means settling down with his friend and constant companion, Kita. Especially since she just broke up with her boyfriend, Joe, during last week’s episode. After a night of partying in Miami (tequila shots and Serena Williams included), even Kita’s sister BJ tells her that Kita could be — and maybe should be — with Terrell. This is how Kita takes this suggestion:

As you can see in the above clip from this week’s episode, she hates when people think she and Terrell are together. But she protests just a little too much.
Both Kita and Terrell seem to have other ideas. Back in L.A., Terrell invites Joe to Mo’s baby shower to hopefully get something — a reconciliation, or closure — out of Kita. She’s furious with Terrell for going behind her back, but not as mad as she still is with Joe, who vows to do everything he can to get her back. It looks like the first thing he’ll have to do is give her more space.

Check out the remaining segments of this week’s T.O. Show 2 at its video page, and screen shots from this week’s episode below.