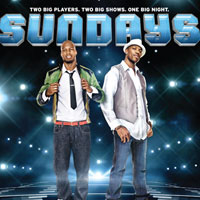 SANTA MONICA, California, June 22, 2010 – Premiering on Sunday, July 11 is “The T.O. Show” Season 2. This season starts with Terrell back on the free market where he needs to decide if he wants to continue his football career and find another team or hang up his cleats and figure out what his life will be post football. Season 2 of “The T.O. Show” premieres on Sunday, July 11 at 10:30 PM* and every Sunday following at 10:00 PM*.

Returning for its second season, “The T.O. Show,” premieres on Sunday, July 11 at 10:30 PM*. Terrell Owens’ one-year contract with the Buffalo Bills ends in a disappointing season and once again the football star is faced with the uncertainty of where he will play next year. Or, if he even wants to play anymore. During the off-season, Terrell will reflect on his career back in L.A. much to the chagrin of his best friends and publicists Monique and Kita who know that having him in town will mean that he’ll want their constant attention. And, with Mo expecting her third child and Kita in the midst of an intensifying relationship, taking care of T.O.’s every whim is not exactly how they want to spend their time.

But, Terrell has big concerns of his own in L.A. He knows that he just might have a shot at reconnecting with his ex-girlfriend Kari ? who has since moved there ? after they broke up during the football season. In addition to trying to make things right with her, Terrell will also take the time to reexamine his relationships with his children, and work hard to become the father for them that he never had, especially with regard to his son. It will all come to a head for Terrell in a climactic season finale that could set the superstar on an entirely new path in his life. Tune in to watch T.O.’s latest journey Sunday, July 11 at 10:30 PM* and every Sunday following at 10:00PM*.

VH1′s “The T.O. Show” Season 2 is executive produced by Evan Prager and Jesses Ignjatovic for Den of Thieves. Executive producers for VH1 are Jill Holmes, Noah Pollack, and Jeff Olde.